So with a brand new KTM Super Enduro in the shop and a long list of changes and modifications the first thing to do is begin the disassembly and order the first parts. The bike is going to undergo a very extensive transformation that will require it to be stripped down to the bare frame and all parts considered.

So we start; first with bodywork to reveal the essential machine under the skin. This is in a sense the essence of the machine – the engine and frame with the suspension holding it up. With the bike in this naked state we’ll roll it into the hallway and shoot photos of the bike from various angles. Aside from the simple documentation aspect of it these images will become the base for sketches and concepts of the design of the bespoke parts that will form the identity of the bike. Namely this will be the tanks and fairing shroud.

We decide to start with the side view to keep it simple. From this shot the sketches that began in notebooks and napkins start to be developed. We discuss the various ways of building a tank; we want the bike to have a rugged functionality but at the same time to be beautiful. We want more capacity than the Super Enduro had and, if we are lucky, as much as an Adventure but carried in a narrower silhouette. We’ll sketch many iterations before we cut metal.

Chris and Tom begin to pull parts from the bike and catalog what can be resold or thrown away and what will be reused. There’s still much to decide about the final bike but with the things we’re certain of it’s time to get parts on order. 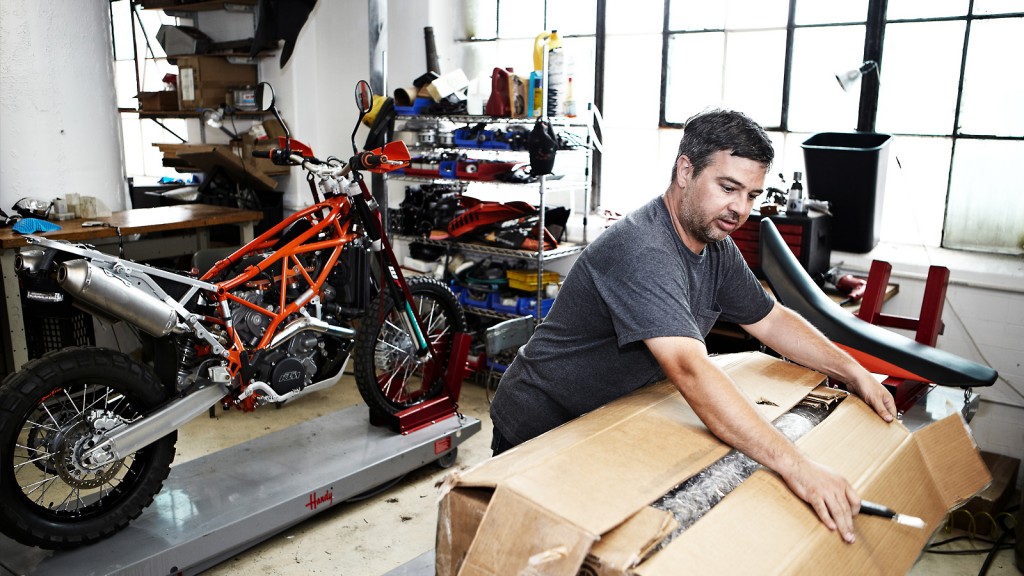 Little by little the bike is reduced to the component parts and sorted onto shelves. As we take it apart we note the differences of the Super Enduro to the Adventure and we’re pleasantly surprised. The oil tanks and radiator are both narrower and the batter is held up high behind the engine as opposed to the Adventure which hides it below the engine in the front where it’s difficult to get to. The smaller radiator and oil tank will allow a narrower profile with the tanks and an overall slimmer design. Both things that are desirable in the end machine.

With the bike stripped and the parts ordered it’s time to pull out the various jigs and begin to plan the AWD frame modifications when the parts arrive. The bike will go back together many times in the process but only with the parts that are needed to fit, or check for clearances. It can be a tedious process but there’s many changes ahead and only one chance to get it right.