At the beginning of December the team all came together under one giant concrete industrial loft roof and hammered out, quite literally, the design of the bike. The direction of the build changed drastically and for the better and it all rotated around one small detail – or rather one large detail.

Originally the team, or at least the NYC contingent, was thinking of the bike as a hardcore off road machine – like a big 950cc dirt bike. The bike has the potential to fulfill the role as it’s lighter than the typical big bore adventure bike but Gerbrandt’s designs stressed a large, meaty rear tire and the look of a bulldog.

While there’s lots of knobbies available there’s only one that stands head and shoulders over the rest – the Continental TKC80 in the 180 width. The widest knobby ever made. At first this idea seemed antithetical. Typical off road wheels are 18” rear and 21” front but the big TKC was a 17” and that paired naturally with a 19” front. The advantages of AWD mitigate the disadvantages of the 19” front wheel. The combination will allow the bike to use the greatest variety of tires for the greatest variety of terrain and take full advantage of the AWD aspect. Once the wheels and tires were decided the design flowed from there. Sketches were adjusted and equipment lists changed. Woody’s Wheel Works was enlisted to build the super hoops needed and the team began the process of translating the paper sketches to three dimensions. 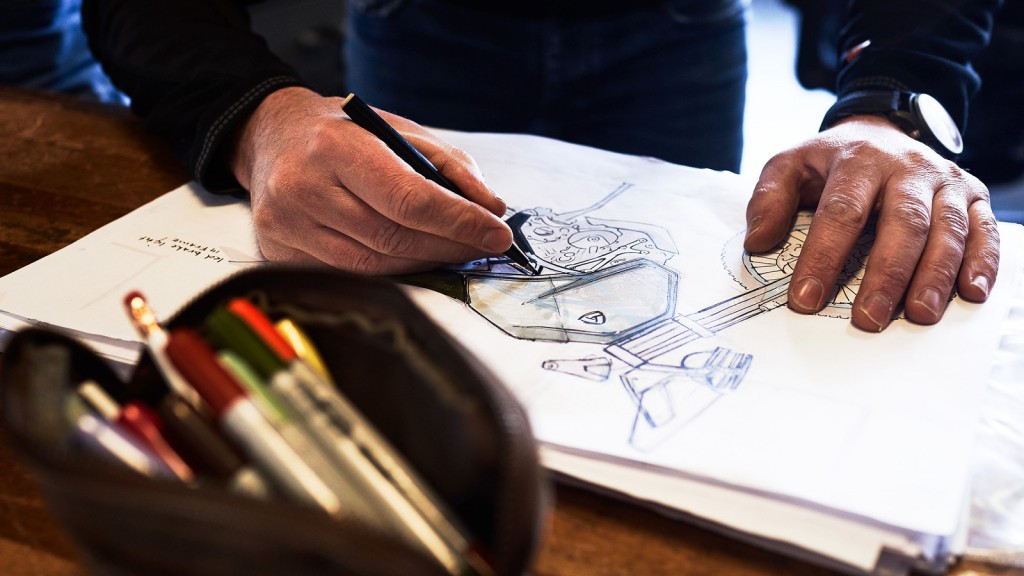 First cardboard was taped up to the side of the naked bike and Gerbrandt’s sketch was transferred to the side. The cardboard serves to define the broad strokes of the design; the general placement of the tank and seat. The tank cardboard is also helping to define what will be the interior of the tank and where clearance will be needed for the radiator and engine.

To help with the defining of the placements the stock seat is placed as a reference to the mockup so that the basic riding position isn’t changed. The basic seat, peg, and bar relationship on the KTM is near perfect – one of the advantages of the adventure platform and it’s similarity to a standard bike.

From here the two dimensional sketch begins to take on its three dimensional form. We use aluminum welding wire and tape as the fastest way to mock up the shapes. The team uses the wire to define the important outlines. One of the driving forces behind the design is to harken to a simpler time of motorcycle design without falling headlong into the realm of “retro” but to draw from what is the strongest aspect of the period – its simplicity. A gas tank looked like a gas tank and wasn’t an airbox, a fender looked like a fender and not an origami beak. A seat looked like a seat. That is an honesty that is lost with modern bikes in the trade for other worldly performance.

In this quest for an honesty of design we decide on parts that are recognizable – a round headlight and a standard seat. Without an endless inventory of parts we scour the shop for anything that can act as a place holder to help us “see” the design. Without a round headlight we grab and old shop light to represent the idea. We consider the stock exhausts as we appreciate their dual design but want something morepure than a canister and decide to use a sexy megaphone for its shape as well as its natural performance.

The teams second day at the shop is the day of action. The outline and shape of the bike has been determined and it’s time again to cut into the bike to make room for the alterations. The stock subframe is complicated and busy and it’s decided to simply eliminate it and weld on a simpler and beefier subframe that will shorten the bike. The wisdom of a welded subframe is debated but Scott assures us that the strength is not an issue and that welded subframes are a fine design choice.

Scott bends mild steel into a U but when we place it Gerbrandt asks for a change. One of the design signatures of Revit is rounded corners instead of curves. It’s a detail that might have been lost without the team in one place but one that is significant to the look of the bike. Round curves are typical on vintage subframes but we want the bike to be modern – not a retro throwback. The subframe it’s curves are interrupted with a straight section. It’s also decided that we should mill the frame to accept LED tail lights. Modern elements used in old ways. The subframe is tacked together and then tacked to the bikes frame in a place and angle that will provide aesthetic balance and comfortable performance.

The subframe is tacked into position and the wireframe of the tank has been filled in with tape and cardboard to approximate its shape. Every move, every adjustment is scrutinized for balance and comfort. Parts are considered, websites consulted and punch lists are added to. While the team has missed its December deadline a new deadline of the end of January is made and with the introduction of the new collection in February there’s no room left for delays. 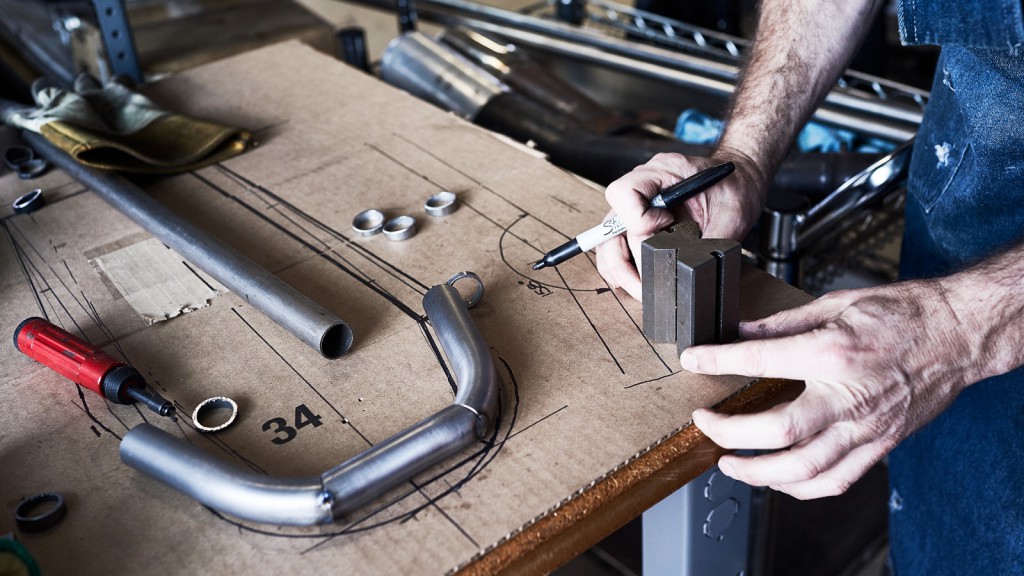 It takes vision to be able to see the final bike through the tape, cardboard, and random parts held with zip ties and wire but they all represent an aspect of the finished bike and the team sees the final bike through the mess on the bike stand. At the end of the weekend Scott rolls the bike into his van for its trip to his shop in upstate NY where he will fabricate the tank from aluminum sheet and craft the new seats subframe. He needs the physical bike to make sure everything fits but at the same time Chris needs the bike to finish the AWD mounting so Scott will deliver the bike back after the tank has been roughed together and will finish it while Chris finishes the drive train. There’s much to be done and little time to do it.