Where to start? What makes REV’IT!#95 the perfect motorbike? Certainly our collective time in the saddle will bring a lot of ideas to the table but there are more questions than answers. First let’s look at some of the goals of the project. These are the bar notes on a napkin sort of thing.

There’s very little you can do to a bike to make it different in a significant way. Especially a way that is functional. Since we just finished building an AWD KTM Adventure and all the jigs and fixtures are in place to build another it seemed like a natural fit but of course this one has to be better. Much better.

Now, contrary to common sense the two wheeled drive conversion doesn’t add a lot of weight to the bike. In fact it’s a bit less than 20lbs or about the weight saved when you remove the stock exhausts and the payback is enormous.

Why all wheel drive you ask? The 950 is a big bike and it has a lot of power. So much that it’s going to spin that rear tire everywhere, all the time unless you’re very disciplined. There are a few smaller bikes that have used AWD but in our mind the bike with the biggest traction problem is the bike that would benefit the most from the advantage of AWD. And in practice this has proven to be the case.

An example is a traditional gravel corner. On a normal 950/990 you can enter the corner and get the bike into a slide but it’s extra weight will work against it and push it to the outside. Backing off if you’re deep in and sliding can’t always save you. Getting harder on the gas is a sure way to swap ends. Here’s where the AWD shines. When you over cook the corner and the bike is heading to the outside, both wheels sliding, you do the thing you wouldn’t expect – get on the gas. It’s counter intuitive but suddenly you can get both wheels spinning and all of a sudden you’re clawing your way back towards the inside of the corner – going faster too! It’s a remarkable thing.

Another advantage is the traditional nemesis of the big bike – deep sand and mud. Normally the weight of the big bike makes keeping the front light a difficult proposition but with the AWD the bike is always up on top and actively pulling you forward. It’s quite amazing. The same goes for slick climbs – you never have that moment when the rear loses traction and spins and you come to a dead stop. No, with both wheels driving the bike will always find traction. 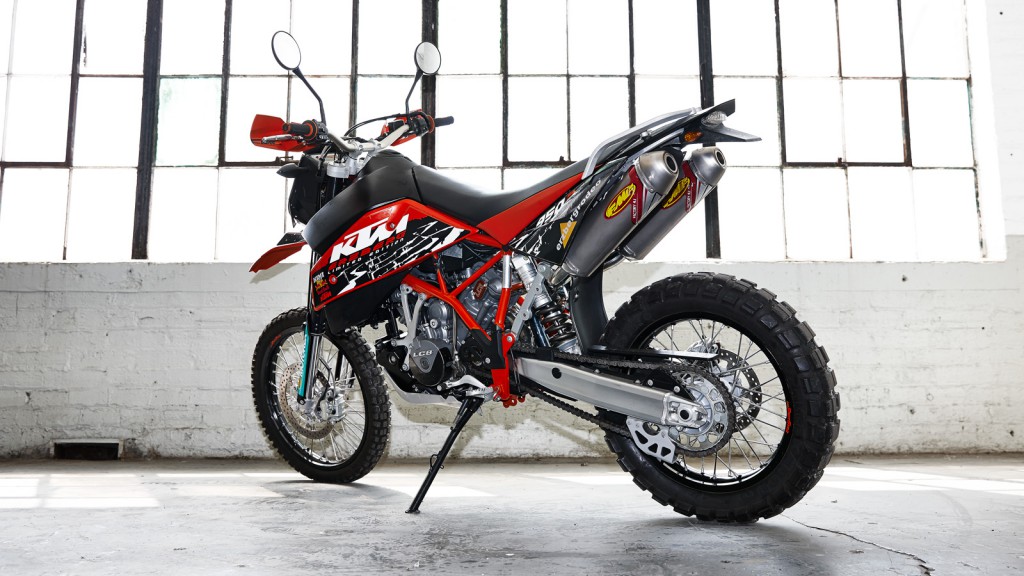 The second point, power, is something that the 950 has no shortage of. But that doesn’t mean we can’t make some improvements there too. The replacement of the CV carbs with a custom set of 41mm FCR’s with our Cosentino developed velocity stacks will yield more power, much more torque and a linear and crisp throttle. All things that make for a more fun and ridable bike.

If we’re going to use a 950 we should use the lightest one and then try to make it lighter. That means a Super Enduro. The KTM that KTM doesn’t make anymore. This meant a search all over the country and then the world for the right bike; which we found – exactly on time, on eBay, with only 500 miles on it. Basically brand new. Nice!

Certainly an adventure bike is a creature of the “form follows function” dictate but there’s no reason to not sweat the details, to finish the small stuff and to make the changes look great. To that end we’re going to replace the tank with an aluminum one that we’ll make in house and it will be the signature visual element of the bike. It will need to be larger and it will need to look good as well.

Comfort isn’t too difficult on an adventure bike – they already have a nice seat, peg and bar relationship so just massaging the details a little will make it a bit better.

This is the beginning of the process, the start of the REV’IT!#95 build for us and it’s going to be a creative collaboration stretching from Holland to NYC to Portland. So watch this space – we’ll be updating the blog every week and we dare you to share your thoughts and ideas as we build REV’IT!#95 – the ultimate bike for the ultimate gear.