The Spring/Summer 2015 photo shoot was meant to mark the completion of the bike, but as final tweaks and details were attended to, the schedule stretched. At the end of March the real deadline approached: The US marketing team would take the bike to a GS Giants’ event in the foothills of Tennessee, where it would be tested and filmed for its own debut short. 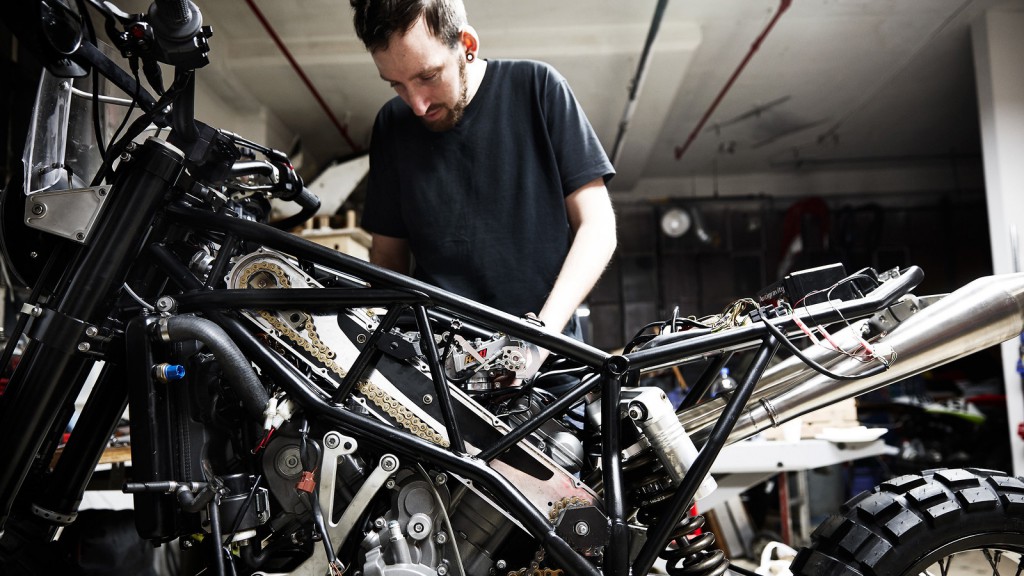 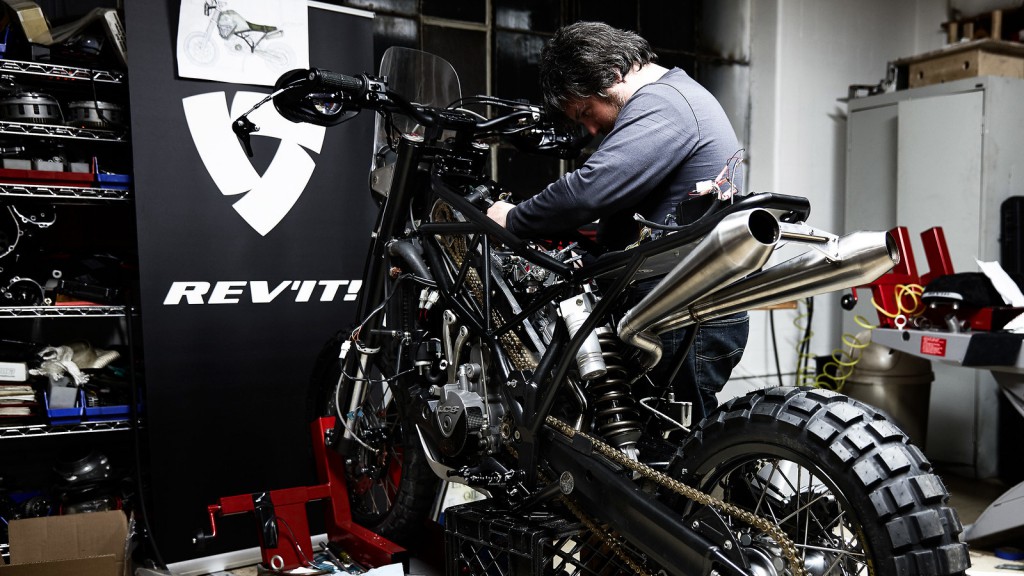 Everything was on track, right up until the night before the bike was to be loaded into the trailer for its trip south. That’s when the sum of the remaining work became apparent, and as the clock ticked on, urgent phone calls (and choice words) were exchanged between the build team. Friends and colleagues were summoned for a round-the-clock build marathon, the local pizza delivery crew ran laps to the shop and back, and just as the team had exhausted the last of the midnight oil, final nuts and bolts were fitted into place.

Gregor shot the bike in the first morning light at a weathered loading dock, capturing its pre-dented and crashed state. Chris packed away the title and spare keys, loaded it into a U-Haul, and wished the team farewell. Twenty-four hours later, the bike was welcomed on Tennessee soil, and testing began. 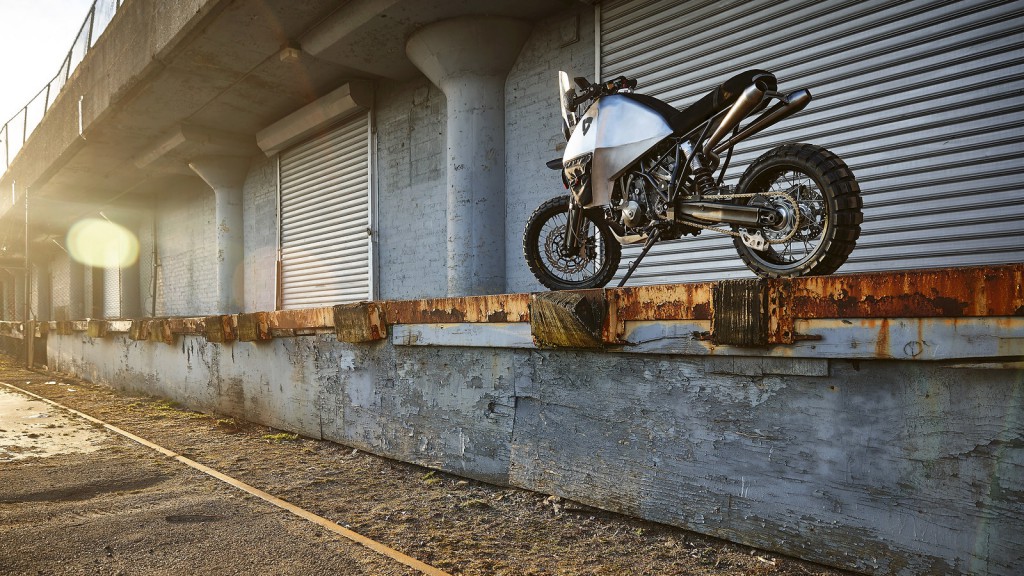 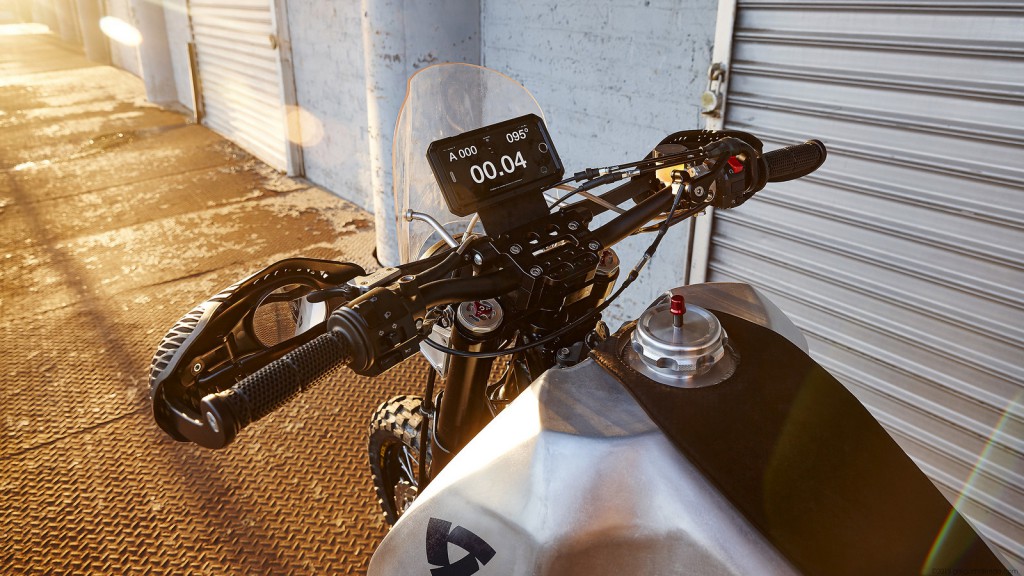 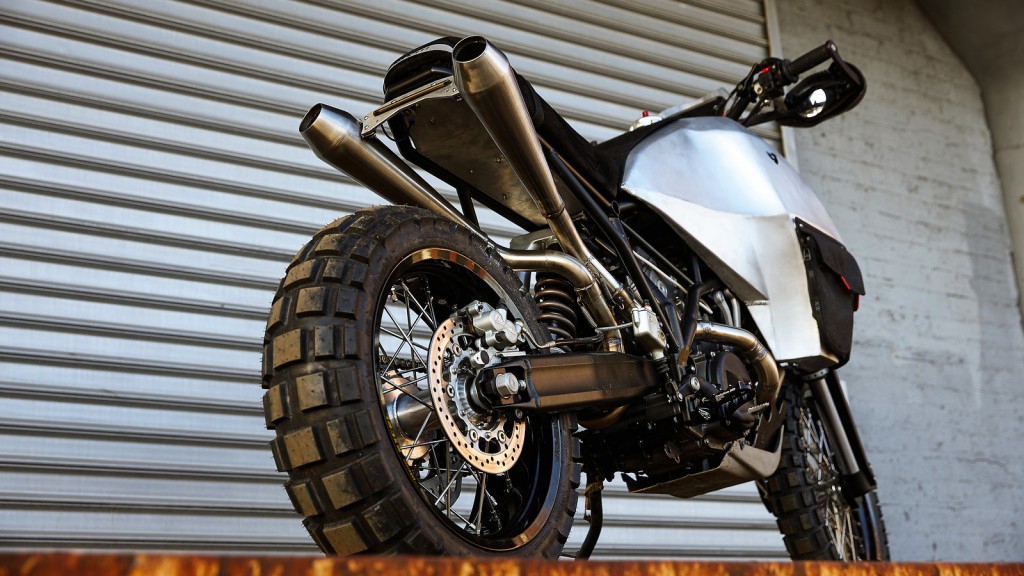 As anyone who had ever built a custom bike can attest to, there are opportunities for things to go wrong at every turn. No bike has ever been put together for the first time and worked perfectly, and the REV’IT! #95 was not destined to be the exception to that rule.

Thankfully, where a million things could have gone wrong only, only a dozen or so actually did — and none were catastrophic.  In Tennessee, miscellaneous loose fasteners and electrical connections were re-bolted and zip-tied back into place, and the bike clawed its way up rutted hills and through rivers for the cameras. Its unique, angry look drew a curious crowd, and the raucously loud exhaust made itself heard from a half-mile away. (This is not a socially responsible motorcycle.)

So, having put it through the paces, how does the bike work? 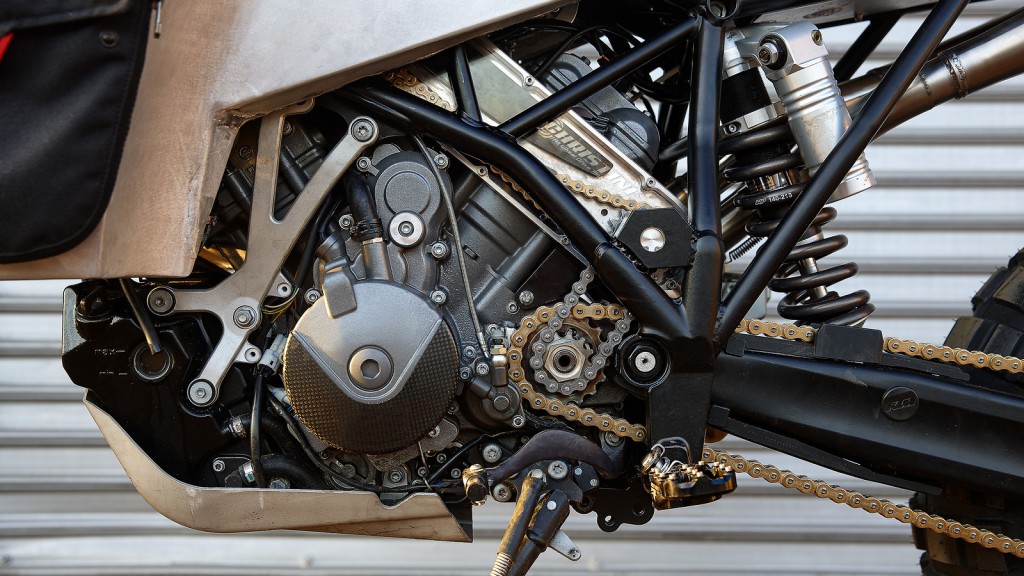 Starting the bike with the FCR flatslides takes the same ritualistic approach as kickstarting a big single; the throttle is opened 3-4 times to allow the accelerator pumps to inject gas in lieu of chokes, and then the starter is applied with the throttle slightly cracked open. The bike bursts into a startling roar with absolutely no hint of subtlety. It’s a very enveloping machine.

After a few minutes of nursing the throttle, the bike settles into a pleasant idle and will start easily thereafter. The clutch is light, the throttle is light and the transmission is light: All belie the intensity of the experience that awaits when the the clutch is let out and the bike pulls like a freight train.

If ridden on pavement, the bike acts like a giant, willing supermoto with no need for the all-wheel drive. But when the road turns to gravel, sand, mud or anything that invites the wheels to spin, the lever on the right handlebar can be flipped to activate the AWD system. Once this is done the bike becomes something different. Something better. Something much, much faster.

This lever engages the clutch that allows power to travel from the countershaft sprocket, up to the headstock and through the series of gears and chains and shafts, all the way down to the front wheel.

The system works only when the rear wheel has lost traction at 80% (or more, depending on gearing) of the rear wheel by virtue of a one-way freewheel inside the front hub — much like that of a bicycle — so that the front wheel is simply along for the ride until the rear loses traction and spins. When this happens the front tire digs in, and the feeling is much like suddenly finding traction (lots of it).

If the bike is sliding, the front wheel pulls it back into line. In a straight line, the handlebars become stiff, as if a steering damper was suddenly turned on, as the gripping front tire pulls the bike faster and more certainly than a motorcycle on dirt has the right to be ridden. 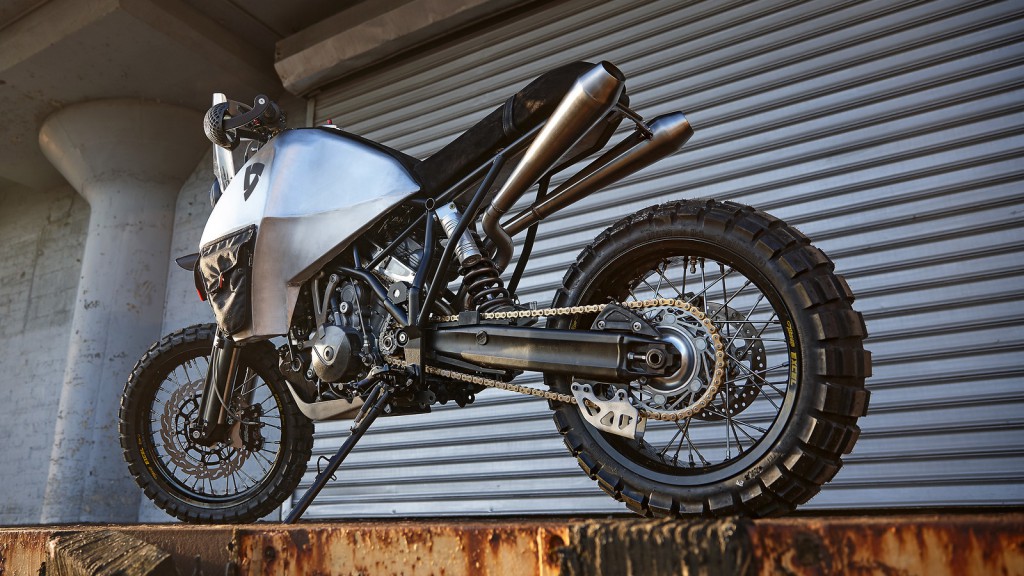 It’s different, and it’s exhilarating to ride, but it’s not without its perils: Suddenly being able to put down so much more horsepower through both wheels means that things are going to happen much faster than usual, so a rider must focus full attention on where he’s headed. The bike will arrive wherever it’s pointed with much greater urgency.

After a thorough flogging in Tennessee, the mud-covered bike was picked up by Chris for post-testing adjustments to the AWD system, then handed off to Scott. With an unparalleled attention to detail, Scott’s team went over the bike with a fine-toothed comb to neaten the wiring, tighten all loose hardware and give it a good pat down before it returns to REV’IT! for a busy summer of testing and events.

The bike is singular in its look, but also in its mechanical ingenuity and physical ability. And this was always the point: To create a custom bike that functioned as well as it looked, and was as technical inside as it was out. For a first custom build the bar has been set high… But that’s precisely how you keep raising it. 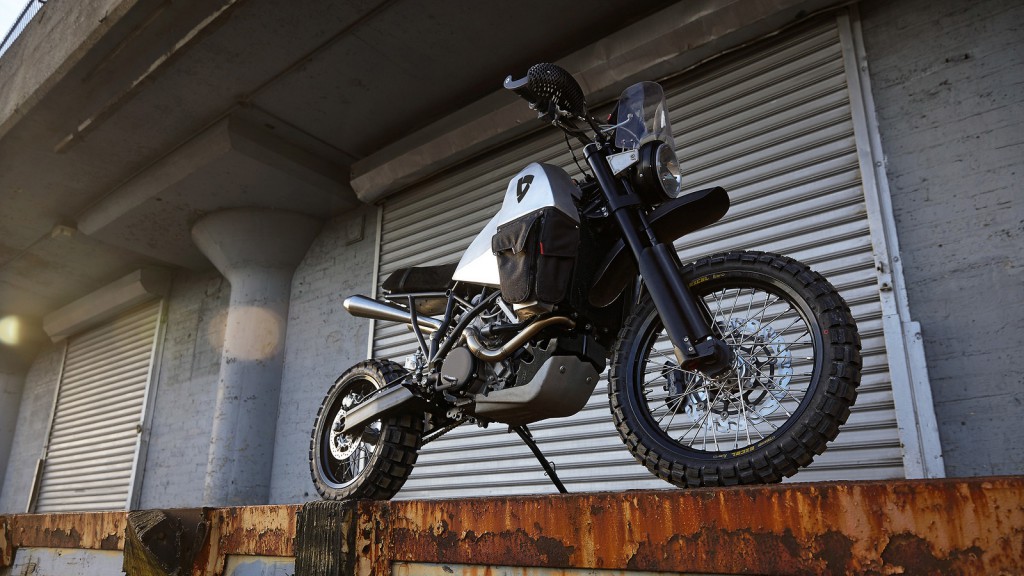